Went to a car show yesterday and to my surprise there was a Cadillac. It is strange being out in Arizona and going to car shows and not seeing a Cadillac. It is almost like the brand doesn’t exist out here. Actually this is the second show in a row where I saw a Cadillac but it must have been 25 shows since I saw the last one.

Most of the time they are modified to be a restomod or a lowrider. To each their own. What you may like doesn’t matter as long as the person that is doing the build enjoys it that is all that matters. 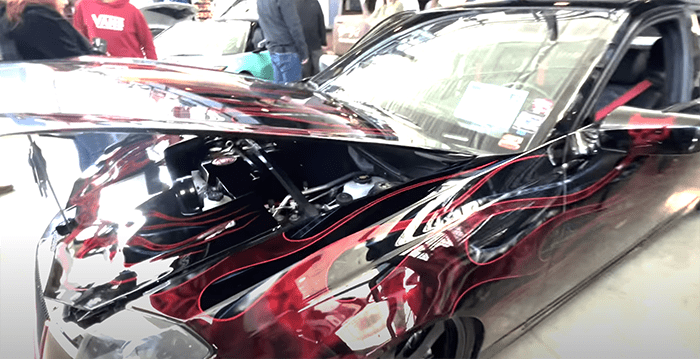 I did a video on this car and put it over on our YouTube Channel. Feel free to share it as I am trying to get to 1000 subscribers. You can also see it by clicking on the image above. It was a really sharp looking car.

Some videos are surfacing of Cadillac’s new electric car the Celestiq. It reminds me of the Cadillacs from the 1980’s with the flat trunk. The way it slops down in the rear. I am still in shock they are making it a hatchback but figuring it is easy to get golf clubs in and out it doesn’t really surprise me.

Enjoy the video. It really is an innovative time for Cadillac. I know the purist hate these electric cars but they are coming. Might as well enjoy them.

Do you see yourself getting an electric car anytime soon?

Yesterday I went to the Cars & Coffee in Tucson Arizona. This is run by the Obession Car Club and they do it twice a month or so. It is a really good show with around 500 cars at least. Sadly I don’t see many Cadillacs there as a huge base of car owners are into other brands more. Yesterday though there was a 1990 Allante. Here is the video I took along with some info about the Allante.

The Cadillac Allanté was designed to appeal to wealthy buyers looking for something different. The name “Allanté” is French for “mirror.”

In 1986, General Motors introduced the Cadillac Seville, a large sedan based on the Chevrolet Citation. The Seville had been GM’s best selling vehicle since 1974. A smaller version of the Seville, called the Fleetwood Brougham, was also offered.

General Motors wanted another small luxury car, and the Allanté was developed to fill that role.

Designer Peter Schreyer came up with the design. He drew inspiration from the Mercedes-Benz 300SL Gullwing and the Porsche 924 Carrera GT.

The Allanté was produced by Italian coachbuilder Pininfarino S.p.A., which had already built cars for Ferrari, Maserati, Lancia, Alfa Romeo, Fiat, and Lamborghini.

Pininfarino built the body panels, dashboard, doors and rear quarter panel, along with the interior door handles and steering wheel. The front bumper and headlamps were supplied by American firm AMX Corporation.