I have been watching the Barrett-Jackson auctions and there are some incredible bargains on the Cadillacs. It is being shown on the speed channel. The Cadillac that is getting all the buzz is a hearse that carried the body of JFK to Air Force 1.

Here is a list of the Cadillacs that are up for auction.

I hope you enjoy the show as much as me.

If you are looking to get a classic Cadillac then this is the auction for you. Garth Richards a collector in Nevada is auctioning off a few dozen Cadillacs that he collected over the years. He wants to find them good homes. With so many Cadillacs being auctioned at one time you are sure to get some good prices. There are over 40 Cadillacs in the collection that are up for auction.

This auction is in a few weeks so there is not much time to go see the cars before the auction. Looks like it will be a lot of fun. For more on the details see Vintage Cadillacs Auctions. If you are going to bid good luck to you. If I had the money I would buy them all. I will try to keep you updated on the actual sales numbers if I can find them.

How Many Ways Can Cadillac Be Spelled?

This week I was checking some stats on the site and I discovered that people do a lot of searching for Cadillacs. I also noticed that a lot of people do not know how to spell Cadillac. I came up with about a dozen ways people spell it. Some are the way it sounds but some are not even close. Here is the list, if you can think of other ways leave it in the comment box. I would be glad to hear them.

Over the years Missy has helped me keep this site going. She is also one of the nicest people going. She is in this contest and I am trying to get her more votes. If you feel like doing me a favor just click on her page and click the yellow vote button.  You can do it once a day until the contest is up. I would consider it a huge favor and thanks in advance.

Hope you are all having a great week. This weekend was good as I watched the Barrett-Jackson auctions the whole weekend. There were plenty of classic cars and classic Cadillacs up for auction. This year they had something called fantasy bidding and you could win an IPad. I guessed right on one auction but so did a lot of other people so I didn’t win but such is life. Will do better next time they have it.

Here is a beauty! A 1953 Cadillac for sale that is in great shape. This site has a ton of great pictures too. If you are in the market for a classic Cadillac I want you to check it out.

Country singer Alan Jackson surprised his buddy Zac Brown with a white 1966 Cadillac convertible. It was his way of saying thanks for letting Jackson sing on “As Shes Walking Away”. Wish they had asked me to sing on the record. I am sure many of you would have jumped at the chance now that you know you would get a Cadillac as a present. 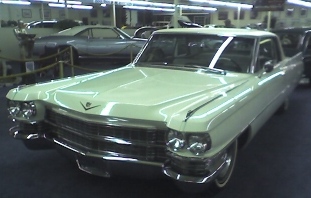 On our recent trip to Las Vegas and the auto collection show we took over 2000 pictures and I am editing them as we speak. When they are ready I will shoot out an email. I am looking forward to sharing them with everyone. In the meantime check out the 1963 Cadillac page from last year.

Just found out about a cool Raffle where you could win a 1958 Cadillac. Want to pass word on to our readers and help a cool charity at the same time. The Limbs for Life Foundation is having an auction where the prize is a 1958 Cadillac. The fully restored car is a hard top with 70,400 miles on it, leather bench seats and power steering, breaks and windows. We’re selling a total of 3,500 tickets at $50 each to help amputees in need at www.limbsforliferaffle.com.

The winner will be drawn at their annual benefit dinner in Dallas, Texas, on Feb. 26. Tickets will be on sale until that morning.

If you have any questions, please feel free to contact