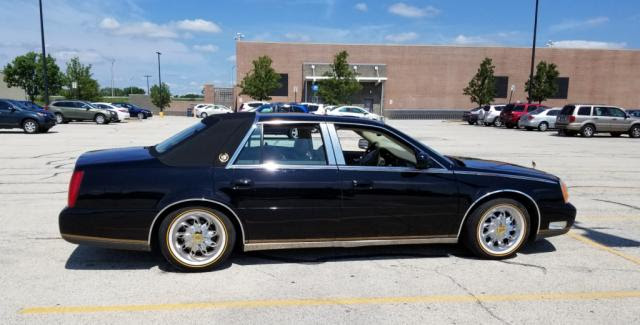 Just got an email from Anthony about the Cadillacs he owns. Very diverse group for sure. 🙂

I bought my sons Cadillac Escalades when they graduated High School. The oldest son selected Black . He put Vogue Rims , which we only run in the summer . Over the years , he had a CTS, then bought a Range Rover , which does not please me . I still have the black 2002 Escalade . It has 322,000 miles , same Trans and motor. I had it repainted 4 years ago and it looks brand new . The only problem is that the stabilitrak light goes on. When the car slips, and the ABS brakes take over the car control. I had to have the ABS disabled and that does not happen any more

My other son, has a Pearl White 2002 Escalade . He also had Vogue mags put on . This car is also mine and has 230,000 miles . Same Trans and engine. Had repair work to body two years ago

These two cars are my daily drivers.

However, when there is no rain or snow, I take out my 2004 DHS. I had as much chrome as I could put on it , with Vogue wheel and tires . It has a Landau top, with extra chrome . I put a nicer grill with the emblem on the hood

I am getting the CT6V in the late summer according to Cadillac. I was only able to get this car because of the inter net. There was a 10 day count down. So I told my sales man at Cadillac that this car will sell out fast. So the week before , I brought in my finances and license . Then the Saturday before the car became available , I made the order. Monday morning , the order was in and when the Cadillac sales time opened up, I had my order placed
Cadillac has sent me a sketch and it was numbered 33 out of 500. I know Cadillac said it was going to make some more, not sure if the total was 500